What happened to the good old days of sci-fi, when spaceships were real models, monsters made of latex and laser guns a curling iron painted silver? Now imagine a universe where everything was just like this for real.

For three ordinary guys Tom, Jeffrey and Gavin, this just became a reality. One minute they were watching an old b-grade movie, the next they’ve been thrust inside the movie itself and at the helm of a rickety old spaceship. Panic ridden they stumble into a space battle. and make a mortal enemy of the evil Lord Froth while unwittingly saving the space princess Lady Emmanor. Then suddenly Jeffrey starts to change into a sci-fi character called Kasimir. They must adapt quickly if they are to survive long enough to find a way home. For all they know they could be next. If that happens they will be lost in this world forever. They embark on a quest to find a cure for Jeffrey and a way back home. This is an action-packed comedy adventure of giant lizards, space battles, robots, aliens, warlords and amazons that has to be seen to be believed. 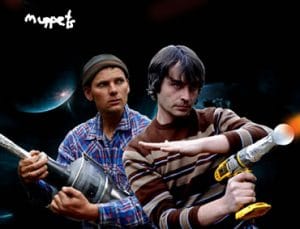 Clever clogs Christian Nicolson and Andrew Beszant (pictured above) decided to realise their dream of writing a Sci-fi comedy and entered the Make My Movie competition in late 2011. Their love for old Sci-fi such as Star Wars, Battlestar Galactica, Blake’s 7, Doctor Who and many many others inspired them to write this hilarious movie. The prospect of this excited the public and judges and pushed them through the various knockout rounds of the competition. The script and dedication of the team startled the judges so much that it earned them a glorious 2nd place out of over 750 teams. Stubborn and naive, regardless of the odds, they were determined to continue this project through till the end on a low budget as it was intended.